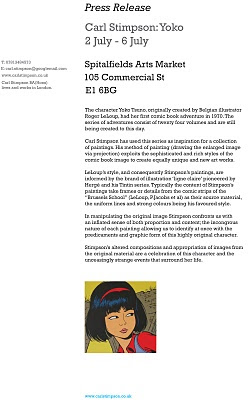 The Character Yoko Tsuno, originally created by Belgian illustrator Roger LeLoup, had her first comic book adventure in 1970. The series of adventures consist of twenty four volumes and are still being created to this day.
Carl Stimpson has used this series as inspiration for a collection of paintings. His method of painting (drawing the enlarged image of vie projection) exploits the sophisticated and rich styles of the comic book image to create equally unique and new art works.
LeLoup’s styles, and consequently Stimpson’s paintings, are informed by the brand of illustration ‘Ligne Claire’ pioneered by Hergé and his Tintin series. Typically the content of Stimpson’s paintings take frames or details from the comic strips of the “Brussels School” (LeLoup, P.Jacobs et al) as their source material, the uniform lines and strong colors being his favored style.
In manipulating the original image Stimpson confronts us with an inflated sense of both proportion and content; the incongruous nature of each painting allowing us to identify at once with the predicaments and graphic form of this highly original character.
Stimpson’s altered compositions and appropriation of images from the original material are a celebration of this character and the unceasingly strange events that surround her life.