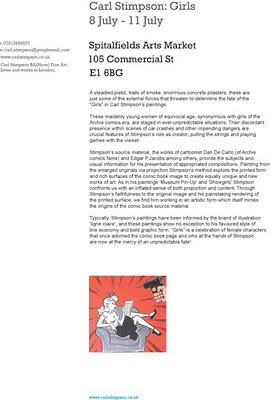 A steadied pistol, trails of smoke, enormous concrete pillars, these are just some of the external forces that threaten to determine the fate of the “Girls in Carl Stimpsons paintings.
These maidenly young women of equivocal age, synonymous with girls of the Archie comic’s era, are staged in ever-unpredictable situations. Their discordant presence within scenes of car crashes and other impending danger are crucial features of Stimpson’s role as creator, pulling the strings and playing games with the viewer.
Stimpson’s source material, the works of cartoonist Dan De Carlo (of Archie comics fame) and Edgar P.Jacobs among others, provide the subjects and visual information for his presentation of appropriated compositions. Painting from the enlarged originals via projection Stimpson’s method exploits the printed form and rich surfaces of the comic book image to create equally unique and new works of art. As in his painting ‘Museum Pin-Up and ‘Showgirls Stimpson confronts us with an inflated sense of both proportion and content. Through Stimpson’s faithfulness to the original image and his painstaking rendering of the printed surface, we find him working in an artistic form which itself mimes the origins of the comic book source material.
Typically, Stimpson’s paintings have been informed by the brand of illustration ‘Linge Claire’, and these paintings show on exception to his favoured style of line economy and bold graphic form. ‘Girls’ is a celebration of female characters that once adorned the comic book page and who at the hands of Stimpson are now at the mercy of an unpredictable fate! 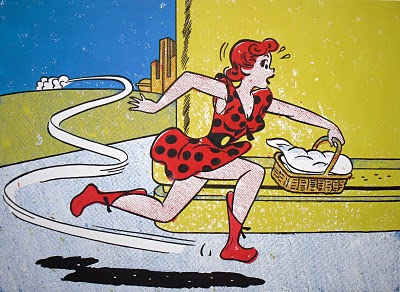 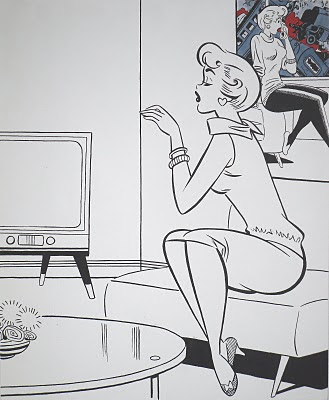 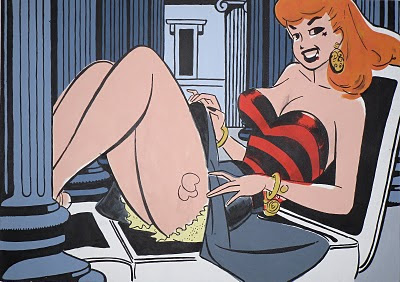 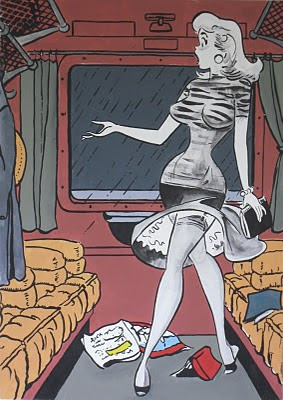